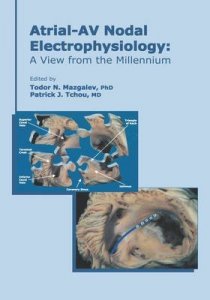 A View from the Millennium

In the words of Dr. Douglas Zipes, "the AV [atrioventricular] node is the 'soul" of the heart, and whoever understands its anatomy and electrophysiology will unlock the key to understanding the anatomical and electrical workings of the heart itself. This book reviews what we know and do not know about the AV node, and as such, serves as a good road map in our search for that elusive key." The book is divided into two parts, basic and clinical. The basic chapters discuss the fundamentals of AV nodal anatomy and morphology in the normal and diseased heart, the principles of slow conduction, the functional property of the transmission through the AV node, its cellular electrophysiology, its control by the autonomic nervous system as well as its behavior and participation in arrhythmias such as atrial fibrillation.The clinical chapters are devoted to a wide array of problems, including the clinical pharmacology of the AV nodal conduction, slow and fast pathway ablation in AV nodal reentrant tachycardia, unusual electrophysiology of the human AV node in relation to AV nodal reentrant tachycardia, AV nodal modification and/or ablation for control of ventricular rate during atrial fibrillation, and the effects of radiofrequency ablation on autonomic regulation of the AV node. Renowned specialists from around the globe share their different, sometimes controversial, opinions on these subjects, thus giving the reader the opportunity to evaluate the current knowledge through the experience of different schools.This book was written to serve as an important source of information for cardiologists, electrophysiologists, anatomopathologists, biophysicists, and biomedical engineers. The authors believe it will be useful "both for those that remember the growth of our knowledge in the past (20th) century, and for those that will finally be able to resolve the remaining mysteries in the next."
€240,00 €228,00